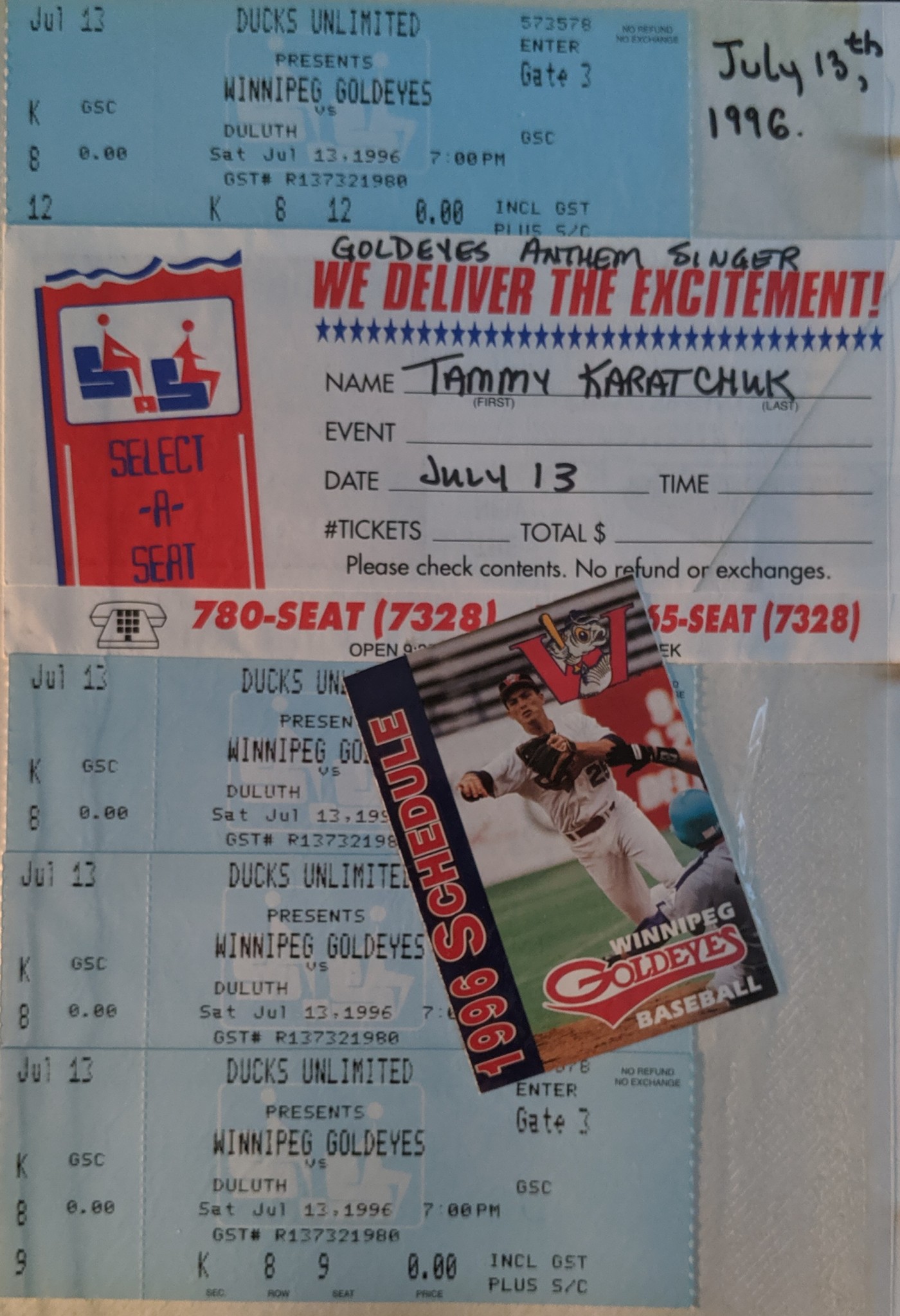 It started at a restaurant.

In 1995, I was working the closing shift at Arborg’s newest, coolest, hippest restaurant, “The Wild Apple.” At the helm, two guys barely who were barely 23 years old working with servers who were also under 23 years old. My eight-hour shifts flew by as I served pasta primavera and Reubens.

As I finished up for the night, *Bert the chef tuned the kitchen radio to the Winnipeg Goldeyes baseball game. So much for rocking out to mid-90s music and Bob Seger.

It was the first game of the season, we caught the anthems. I said, “That’s what I want to do.”

“Then do it,” said Bert. “The worst thing in life is to have regrets.”

After university-gate, I started to work at the Melrose Coffee Factory. And one month later, I found myself in country recording artist Ray St. Germain‘s basement. At the time, he had ten teaching slots, and he had an opening. But, you don’t just saunter in and walkout a St. Germain student. You have to audition.

I’d been singing for awhile, but my mom suggested I switch to country. Admittedly, it suited my alto range. Celine Dion and Mariah Carey did not. After a few months of lessons, we made a demo for my anthem audition. A couple of Ray’s students also jumped into the Goldeyes anthem audition game. I thought, well, this just became a competition.

At the time, the Fish didn’t play out of Shaw Park. They pitched out of the demolished Winnipeg Stadium near Polo Park Shopping Centre. I mailed my demo on a cassette and singing resume (yes, those exist) and I hoped for the best. And – joy – I was called in for a live, in-person, face-to-face audition. Barely two days later, I received the phone call of a lifetime: I was chosen as an anthem singer.

I sang at two Goldeyes games, and they were completely different.

The first one required only O Canada. I waited near the edge of the field as the lyrics ran through my head. Then I heard people calling my name. Cool, people from Arborg were at the game. Waving at me. No pressure.

My attention went back to the field as the announcer said, “Please welcome to the field to sing our national anthem, Winnipeg’s own, Tammy Karatchuk!” I had goosebumps. I stood on the pitcher’s mound, the crowd looked massive. I remember the cheering. The applause. The vibe. It was an amazing experience.

The second time I sang for the Goldeyes was a nightmare. Rain pelted the field. Thunder echoed in the distance. I had to sing both anthems. I thought, no sweat. I sang under rainy conditions many times and …  holy crap that’s lightning! Lightning! Fork lightning!

I didn’t even hear the announcer. I didn’t hear anything. I don’t know if the crowd cheered. Before I went out, someone swaddled me in a Winnipeg Goldeyes wind breaker. As I inched towards the mound, I heard thunder. As per protocol, the American anthem – The Star Spangled Banner – is sung first.

On cue, there was lightning in the distance. Fork lightning. Not the non-dangerous spoon lightning. “ … what so proudly we … ” and I sped through the song faster than a cheetah on steroids. Because I was in the middle of an open field holding a lightning rod in the form of a cordless microphone.

This wasn’t the time for, “Well, a real professional wouldn’t let the possibility of death bother her,” Um, yeah, no. I barely remember singing “O Canada” before I gave a quick wave and beetled off the field.

However, that wasn’t the end of my anthem career. The Winnipeg Cyclone Basketball team! I sent them my anthem demo, and they called too. But what to wear?

In April 1996, I watched – and recorded – Winnipeg Jet’s anthem singer, Jennifer Hanson, deliver the anthems for the last time at the Winnipeg Arena. She rocked a little red dress, and I wanted to follow her lead.

Whenever I sang at bars, fairs, or events, I’d dress for the occasion. Ray used to say, “Make yourself memorable.” When I sang with him at the Holiday Inn in 1996, I wore a full-length navy jacket with a faux fur collar, and I shimmied out of that to reveal a strappy copper dress.

It wasn’t a red dress, but for my first Goldeye’s game, I wore a cute blue outfit. The second game, I chose a black romper dotted with daisies.

But when the Cyclone called, I stepped it up. Wearing a full length, low sweetheart neckline forest green velvet dress with a high side slit.

The Cyclone games were at night. Before the basketball game, I met the Cyclone Lightning Dance team. Two years later, one of the members and I ended up modelled together – but that’s for another post. I was super pumped to sing the anthems. Excited to be at the Winnipeg Convention Centre. Relieved it was winter. Zero threat of lightning.

Maybe it was the acoustics. When they announced the anthem, the response from the crowd was super loud. Again, I had to do both anthems. I ran through them several times prior to the game, and I was confident.

It was smooth sailing as I started the American anthem. Until the “ … through the twilight lights last gleaming” and let’s hit that high note “… oh say does that star spangled banner yet wa -insert embarrassingly noticeable voice crack here- ve.”

My voice cracked like the last kernel of popcorn. But, the pro-Canadian crowd cheered as though it were a figure skating competition and I’d landed a triple. Which threw me for a loop, because I messed up – and I paused and smiled – and I realized, shoot, finish the song. When I started O Canada, again, I was thrown off by the cheers. Rambunctious cheers throughout the song. Totally different than the baseball crowd. I didn’t expect this. I liked this.

I waved to the crowd, and I left court. As I passed the mic over to the announcer, I just said, “That was so much fun.” The dance team were already on the court, and some whispered, “You were good,” and “That was awesome!” and “You’re coming back, right?”

That was my last appearance as an anthem singer at a sporting event.

In of June 1997, I moved back to Arborg and I had to cancel my audition with the Goldeyes for the upcoming season. I sang the anthem for the Arborg High School’s Remembrance Day services and the Arborg Skating Club’s ice show.

I returned to Winnipeg – wow, I sound like a nomad – I auditioned again. When I sang for the Goldeyes the first time, they were in their second-year as a team. Fast forward, and more anthem singers were coming out of the woodwork.

In 1999, I sent in my cassette and singing resume. But my previous anthem experience didn’t grandfather me a spot. However, I made the cut for the live audition. I sang for two people, and they mentioned my country “twang.”

“I see you sing country.”

“Yes. I’ve been singing country for about four years.”

“Yes, we can tell. There’s a definite country … twang.”

When I received the call, my heart skipped a beat when they said, “We’ve made our decision, and we’ve chosen three people.” Okay, this is my “yes.”

It was my what hurts the most is being so close moment. It came down to my “twang.” They feared it wouldn’t resonate with everyone. After a close vote – I was fourth. Pretty sure it was a distant “twang” fourth. At the time Shania Twain and Garth Brooks were ripping up the charts, but they didn’t want someone with a twang.

Undeterred, I auditioned every year – minus one – until 2007. Without success. Sometimes I made the live-audition cut. Some years I didn’t.

The Winnipeg Blue Bombers were seeking anthem singers for their 2019 season. With seconds ticking away, I sent them an MP3 of O Canada. On a whim – and the last day for submissions. I sang into my Smartphone, sitting in my vehicle about to leave Arborg.

I didn’t receive an audition, but I was happy that I tried.

And that Bert encouraged me to get in the game in the first place.