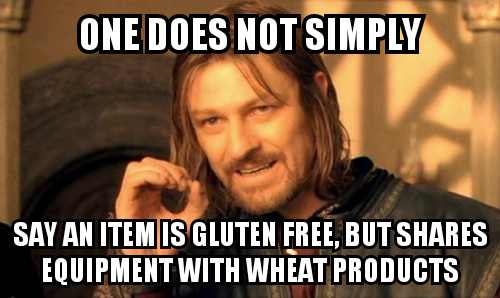 We had to go there.

A friend called today. Our conversation was fine until she brought up a painful word.

Gasp. For ten minutes, we spoke about bakeries. Lovely, sweet bakeries. Filled with gluten. Lots and lots of gluten.

Don’t offer me a macaroon. Please, I don’t want rice flour bread. I want a sugar-coated doughnut and slices, in every flavour.

I want an éclair, without the crunch. A beautiful honey-glazed doughnut from my childhood. The kind my Baba and Gigi would stash in their pantry. Seriously, why am I doing this to myself?

I was addicted to éclairs – or Long Johns. From practically birth until  2010 – when Celiac slapped the chocolate covered, whipped treat from my paws. I’d give anything for one more counter-productive, post-skating morning. Stepping into the Arborg Bakery. Oh, that glorious smell of the Arborg Bakery. That scent should be a cologne, or bubble bath … or something.

Ever try those gluten-free cake doughnuts? Me neither. A doughnut shouldn’t start out in the freezer.

In 2010, I stumbled upon this quaint Winnipeg bakery, Oma’s on Roblin Blvd, who carried gluten-free pastries and other yummies! No doughnuts, but it had billions of GF slices. I almost lost my mind when I saw GF Focaccia bread. Pies. Cakes. Cream puff. Loaves. And the best éclairs. I even wrote a story about them for the Winnipeg Free Press. Oma’s became my Saturday morning college routine. Pricey? Yes. Necessary to keep me sane while in college? I regret nothing.

I was addicted to Oma’s panda bear square. Similar to Nanaimo bar, only with a silkier filling. Like satin. Like lace. Like, why am I doing this!

Then, I moved to Edmonton. Since I couldn’t take Oma’s with me, I took a loaf of Focaccia and white bread. That was all. Because Edmonton was a gluten-free paradise. Kinnikinnick. A GF booth at the Farmer’s Market. Loads of GF restaurants.

Fast forward to 2013 when I reluctantly returned to Winnipeg. There are scratches at the Alberta-Saskatchewan border as proof. Scratches, tears – same difference.

The thought of Oma’s éclairs lifted my spirits. It was a rainy, sleet-y day in November, 2013, and my first week back in Winnipeg. I stared out the window, like a puppy with excitement and perked ears. Only to be let down.

Oma’s Roblin location was gone. The gluten-free bakery was gone.

I sat in Starbucks and cried into my caramel macchiato. Over a silly éclair.

But it was more than an éclair. It was an éclair that I didn’t need to toast, cook or light on fire to taste like an éclair.

I felt as though I lost a part of my childhood again, even though I’d only been an Oma’s customer for a year. They’re still open on Henderson, but they don’t carry the array of GF pastries – for obvious reasons.

Oma’s on Roblin left memories of early Saturday studying. The best Focaccia BLTs. And “where have you been all my life” egg in a nest.

Maybe freezing them wouldn’t have been such a bad idea.