My Gigi Taraschuk and I outside his condo, July 2010.

To my Gigi Taraschuk,

You left us seven years and three days ago.

You died around 11 p.m. on Christmas Eve.

On the anniversary this year, I went to the graveyard where you and Baba are buried. I skipped doe-like, as though in a park, but I couldn’t find your graves. I did successfully slip on a flat headstone and bash my knee.

I miss you, Gigi. And I miss Baba. You have no idea. You and Baba practically raised me as a child. And for that, I’m grateful. When I’d spend the nights, I miss setting the table the next morning. My sister and I taking out the toaster, the peanut butter and all the jams. By that time, you and Baba were up. And you’d wonder into the kitchen and say, “Good morning, children.” Baba would say, “Good morning, children. And how did we sleep?” During breakfast, you and Baba would whisper to each other. You’d say, “Pass the honey, Honey,” and Baba would smile, and you’d touch her hand as you took the honey. Your house was full of love, even though it was just the two of you. 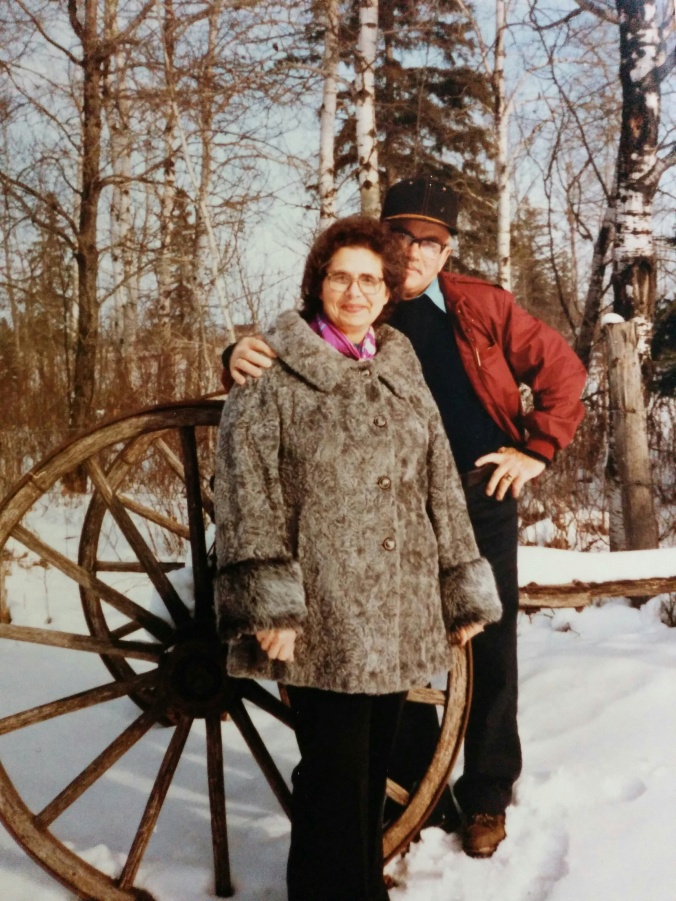 Baba and Gigi at their home in Silver, Manitoba; mid-80s

I miss staying with you and Baba. When you’d take naps, I miss reading comic books and going through that stack of lime and purple scrapbooks. When I was older and I stayed in the den, I’d lay on the Davenport – flipping through those scrapbooks. Learning about my family. Seeing how Baba documented the photos. Something I did in my high school scrapbooks too.

As weird as this sounds, I even miss Sunday mornings and going to the Jehovah’s Witness Hall. My sister and I would dress in our most appropriate clothes – which were usually deemed inappropriate. We wore jelly shoes rather than leather shoes. You always wore shoes in the house, but to the Hall, you wore shiny immaculate shoes. And they’d echo against the linoleum.

You were so stubborn. I stayed with Baba when you had a mini-heart attack. Though I don’t understand how any heart attack can be classified as “mini.” When we came to pick you up the next morning, Baba said, “Is that Gigi?” You discharged yourself and you were walking towards us. Along a main route. Five minutes later and you probably would’ve been along Hwy 7. And more stubborn, you drove home.

Gigi cleaning snow off the house in Silver, Manitoba. See Baba’s handwriting on the photo?

Gigi, you treated Baba like gold. You had so much love for her in your heart that I truly believe people can die when it breaks.

I know Jehovah’s Witnesses don’t believe in an afterlife, but I do. I believe you and Baba are reunited. That Baba is singing again in a wooded pasture with my Great-Auntie Jean, who I never met – but who Baba missed so much. That you’re with your little brother Steve, who you never met, but you’re named after.

I don’t understand much about the other side, whether there’s a pearly gate or a curfew, but I’ll like to think you and Baba visit once in awhile.

Because on Christmas Eve, I heard footsteps in my kitchen on the hardwood floors.

I miss you, Gigi.